The three artists ask each other one burning question and share one track currently heavy in rotation.

On Friday, January 20th, Martyn, Doctor Jeep and Taylor Bratches step into the Sound Room for their very first times, USBs jammed with the heaviest selections of throat-rattling bass, jungle, and breaks. Ahead of their night, we asked them to do one of our 3×3 features, dive in below and grab your tickets for the night. 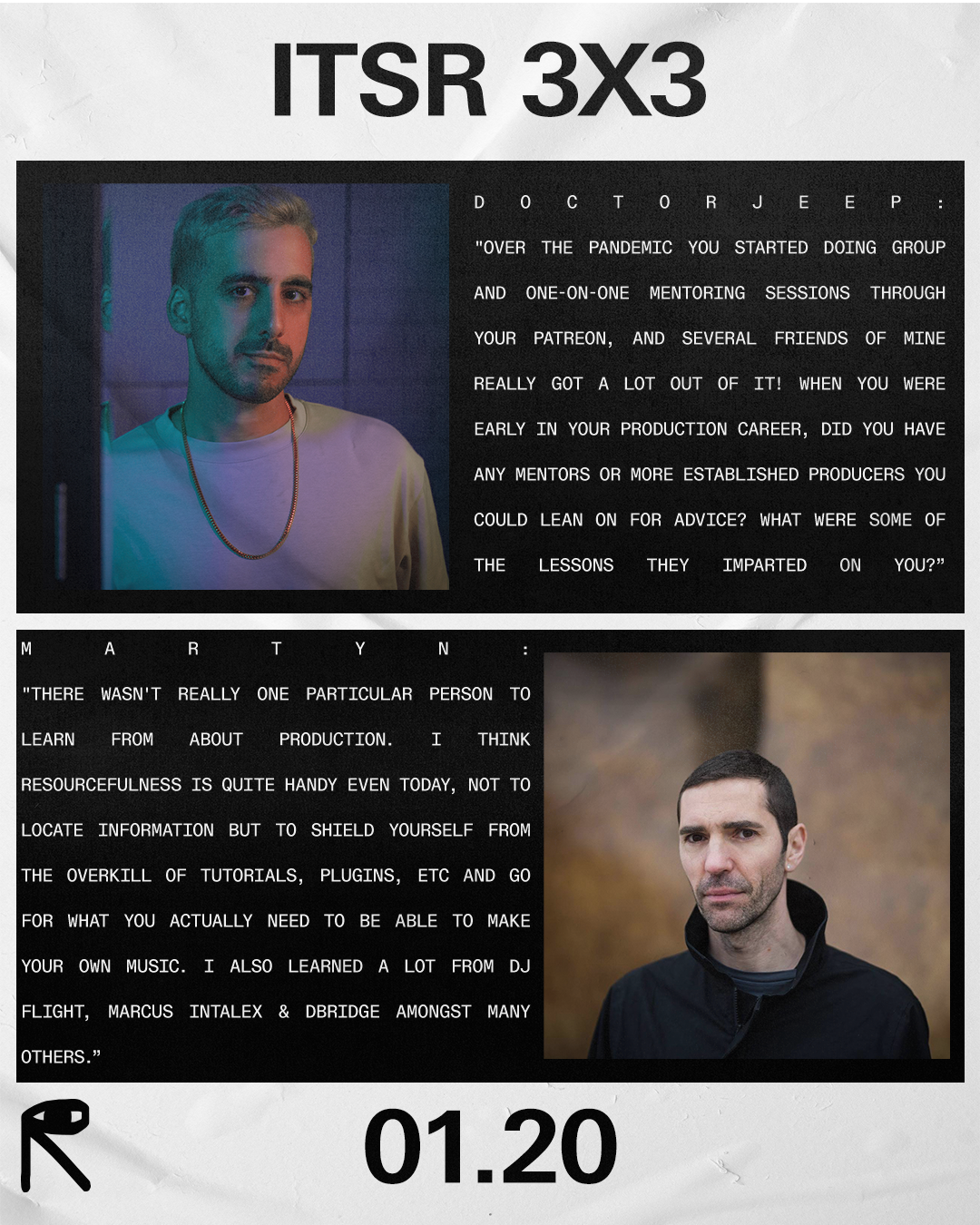 Doctor Jeep to Martyn: Over the pandemic you started doing group and one-on-one mentoring sessions through your Patreon, and several friends of mine have been through your residency program and really got a lot out of it – kudos to you for doing that! When you were early in your production career, did you have any mentors or more established producers you could lean on for advice? What were some of the lessons they imparted on you? If you didn’t have someone like this, what resources would you have wanted at that stage in your career?

There wasn’t really one particular person to learn from about production, in fact, I was messing around in a DAW for several YEARS before I even saw someone else use it properly (can’t really imagine that right now but it completely blew my mind). Of course there was information and knowledge out there, but it wasn’t as readily available so you kind of had to patiently piece it all together from different sources. But I think that resourcefulness is quite handy even today, not to locate information but to shield yourself from the overkill of tutorials, plugins, gear, etc and go for what you actually need to be able to make your own music, less is often more! As for dj’ing and how to do things I made a lot of mistakes which is great for learning 🙂 I also learned a lot from Dj Flight, Marcus Intalex & dBridge amongst many others. They understand that when you share things it makes you stronger not weaker, and that’s a very important lesson. 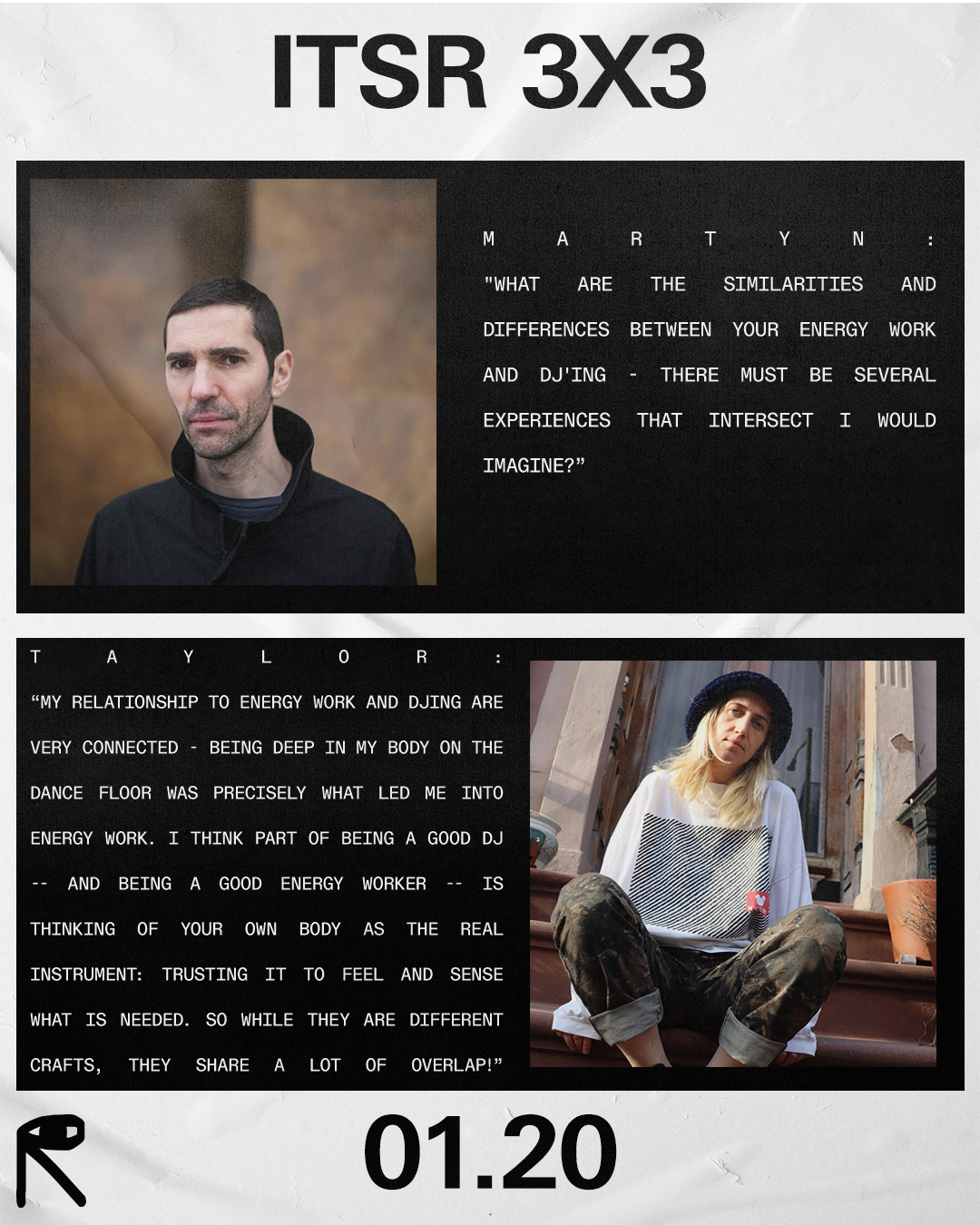 Martyn to Taylor Bratches: I’m interested to know Taylor the similarities and differences between your energy work and dj’ing – there must be several experiences that intersect I would imagine ?

My relationship to energy work and DJing are very connected – being deep in my body on the dance floor was precisely what led me into energy work. I became very attuned to my own energy and the energy of others around me, and began to hone that as a practice. At their core, DJing and energy work are both about sensing and working with vibes / frequency intentionally. I see DJing as sort of an externalized form of that (working with music and the crowd), whereas energy work is more about going inwards and getting really attuned to the subtler frequencies in yourself and others. Both create a symbiotic relationship. Both are intuitive: sensing what track to play next, or where to put the hands next, knowing what areas of the energy field need attention, or what the crowd is feeling. I think part of being a good DJ — and being a good energy worker — is thinking of your own body as the real instrument: trusting it to feel and sense what is needed. So while they are different crafts, they share a lot of overlap! 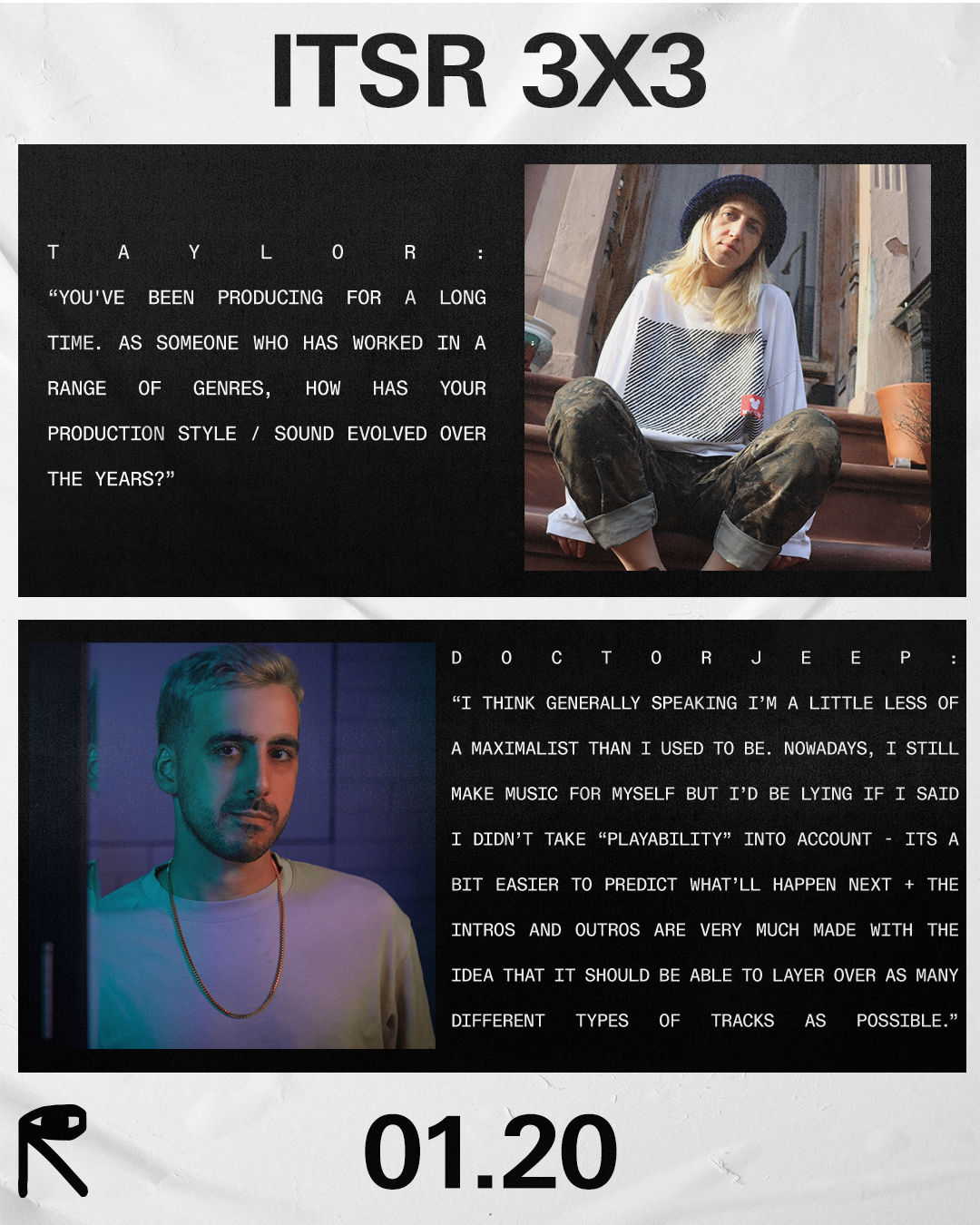 Taylor Bratches to Doctor Jeep: You’ve been producing for a long time. As someone who has worked in a range of genres, how has your production style / sound evolved over the years? How close or far are you now from your roots? And what do you think of the idea of being a “crossover” artist?

I think that generally speaking I’m a little less of a maximalist than I used to be. It took me a while to realize that the key to really effective tracks in the club is simplicity, both in terms of the number of elements going on and the main hooks of the tracks. When I look back on my earliest tunes, they had really crazy meandering structures that weren’t super DJ friendly, and often times they were just a little too busy/chaotic to be blended seamlessly. Back then, getting people to play my music wasn’t as much of a concern, and because electronic music was so new to me and I was constantly discovering new styles, I just wanted to make interesting stuff for myself. Nowadays, I still make music for myself but I’d be lying if I said I didn’t take “playability of the tracks” into account – its a bit easier to predict what’ll happen next in each track, and the intros and outros are very much made with the idea that it should be able to layer over as many different types of tracks as possible.

In terms of how close I am to my roots, the musical ideas from the first few tunes I made and now are actually quite similar, they’re just executed in a more technically precise way. That said, a major difference is that I have been making a conscious effort to incorporate a lot more Brazilian sounds and influences in my music recently: I realized how important it is to pay tribute to my heritage with my art, and it feels great to weave in the sounds and styles I grew up listening to.

Lastly, being a DJ that can play a little bit of everything is definitely a double edged sword. On one hand, you’re able to adapt to a lot of different situations – there’s been a number of instances of me showing up to play a party and the crowd’s vibe is completely different than I anticipated or prepared for, so being able to adjust the game plan on the fly is something I do think I’m decent at. However, it becomes an issue when you don’t specialize in any one sound: promoters don’t really know how to book you, or assume that the style you play is exactly what your most recent releases are. This tends to happen when I have a streak of tunes that are all in the same general universe coming out in a short burst of time. There’s been times where I’ve had a few DnB tracks come out in a row for example, and then I exclusively get booked for DnB shows for a few months, even if I have a discography that encompasses (and is primarily composed of) other genres. That said, I like the novelty of making and playing different music, so I wouldn’t opt to specialize, even if that would technically be better for my career.