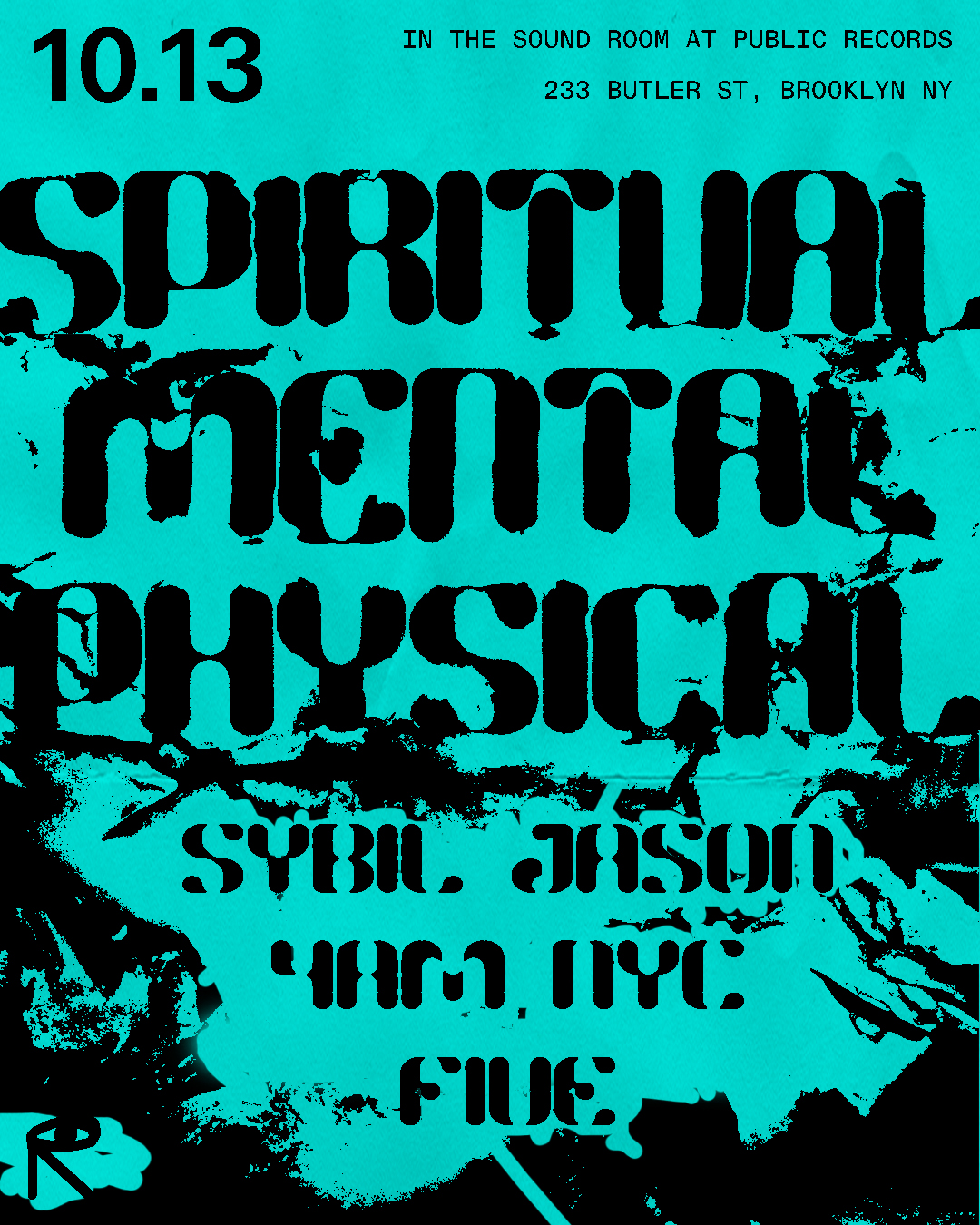 10/13/2022 - 9:00 pm - Sound Room
Spiritual Mental Physical w. Sybil Jason + 4AM NYC + FIVE
The NYC-based collective is back for another Sound Room takeover, bringing a trio of DJs sure to bring the heat.
TICKETS

We are t h r i l l e d to be hosting a second function at Public Records in their magnificent Sound Room, Thursday October 13th.
Our first party at PR back in June was truly one for the books. We were overwhelmed and delighted to see so many of you come through and dance with us from heady-start to euphoric-finish. We don’t believe in attempting to re-create what has gone before, (a futile endeavor that merely amuses the gxds), so instead we push forward with a fresh trio to tickle your senses and fulfill your every night time fantasy:

It’s giving true New York Night Life, honey! It’s Disco, it’s Ballroom, it’s House. It’s Acid, it’s Techno, it’s Funk and Soul. It’s humor and passion and grown-ass business in the booth. No fakers, no phonies, no BS. Comin in hot, slammin down, leavin you wet, drippin sweat! We are glamour, we got soul, we’re doing the MOST and it’s all for Y O U !

Come early! Hear the needle hit the first record! Stay til the bitter end and holler for your encore!

SYBIL JASON
Where to begin with Mz Sybil?!
Well for starters, she is a native New Yorker of Haitian descent – holding down the NYC scene for almost two decades, refusing to be pigeonholed.

She is an effervescent and seasoned radio host – presenting the Minimal Wave show at New York City’s East Village Radio for years before starting her own show: FARCED. This was broadcast to the world via various reputable stations, including Berlin Community Radio, Barcelona’s Dublab, Rinse France, and most recently The Lot Radio.

She is known for her wide-ranging musical taste that spans Techno, House, R&B, Rap, Experimental and more – she expertly slides from one sound to the next without hesitation during her sets, often drawing from her Haitian roots, blending Haitian edits in and out of her eclectic selections. And she is DAMN GOOD FUN to be with – at a party, in a booth, on the street, e v e r y w h e r e – the magic of Sybil Jason surprises and rewards open minds at every turn. A living legend, to be sure.

FIVE
Five is a New Orleans-born DJ currently living in San Francisco. His deep love of all things Club music, combined with a reverent focus on classic House records cemented his reputation in New York as a bold and exciting talent when he lived and dj’d here for ~appropriately!~ five years.
Five is also one half of the DJ duo Babygirl (@aneveningwithbabygirl). Their functions are infused with all the raw, fun, and sexy energy present within the beloved classic multi-genre House sounds they know and love so well. Five’s solo dj sets are full of new and old favorites, cheeky surprises, and plenty of moments to feel the Love because…Love is the Message. Prepare yourselves to fall head-over-heels in love tonight with our magic number. You ain’t ready!

4AM NYC is the founder of Spiritual Mental Physical, and host of a brand new talk-radio show of the same name, airing regularly on The Lot Radio. They are a producer, educator, and vinyl assassin like no other; providing nights of music unbound by genre, dedicated to the dancefloor and always ruled by a furious and vivid emotional spectrum. Storytelling takes precedence in their practice and the tale will be told by any means necessary – whether it’s via heart-wrenching soul, finger-snapping house, euphoric and demonic techno, or unclassifiable future classics straight out of leftfield – their delivery is always uncompromising and energizing, passionate and sincere. For over a decade they have served dancefloors the world over and released iconic, flawless mixes which gained them recognition notably from Resident Advisor and Defected Records.

They invited both Sybil and FIVE to play with them tonight based on several many fun, ridiculous, and truly life-affirming experiences shared in clubland, as well as from being inspired by the inevitable synergy between the three of them. The SMP mission statement perseveres: You will see & hear Legends and Locals tackle unlikely time slots with relish, and play in harmony alongside each other. Everyone is given their proper time and space. Worlds collide.