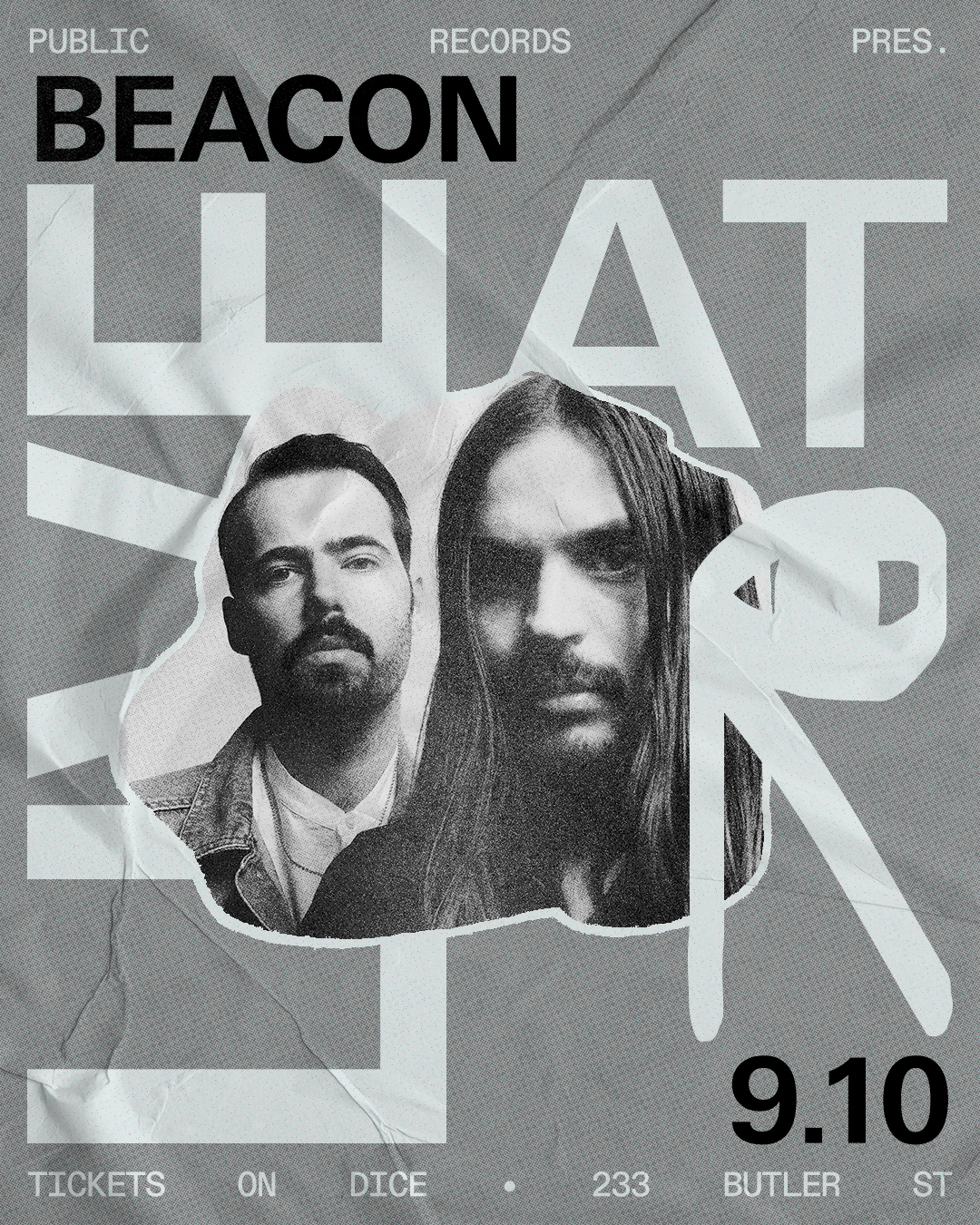 09/10/2022 - 7:00 pm - Sound Room
Beacon
Brooklyn duo Beacon bring their expansive new album, Along the Lethe, to life in The Sound Room to celebrate its release.
TICKETS

“I was haunted by this feeling of history intruding on our reality as lockdown descended on NYC,” says singer and producer Thomas Mullarney III of those surreal weeks in early 2020. ” I was reading a book called The Wake by Paul Kingsnorth about the apocalyptic aftermath of the Norman Invasion of England in 1066, written in a ‘shadow tongue’ combining old and modern english. This uncanniness followed me through the pandemic.”

It was during this strange, illusive period of that lockdown that Beacon wrote Along the Lethe, their fourth full-length record following 2018’s Gravity Pairs. The Lethe (Greek word for Oblivion) is one of the 5 rivers of the underworld in Greek mythology. The newly dead who drank from its waters lost all memory of their earthly lives. Composed and produced largely in quarantine, Along the Lethe is an album as much about the allure of forgetting tragedy as it is the need to maintain our connections to the past.

Its music is a vibrant reflection of the conflicts and contrasts inherent to rich interior lives set against the backdrop of an unseen external siege. Early in the record, “Pay My Debts” reckons with guilt and absolution while its weighty R&B cuts shapes out of the thick atmosphere, and later, “Nova” takes on a snappy disco edge amidst lyrics about letting go of what’s already been lost.

Album centerpiece “Ostrich” invites multi-instrumentalist Colin Stetson to weave a tapestry of saxophone notes into its subdued piano chords, gracefully revealing Along the Lethe‘s untethered emotional core. The sonic hallmark of the song is its  ‘Ostrich’ tuning, a method that calls for all strings on an instrument to be tuned to the same note. (The technique was employed by Lou Reed and John Cale to give The Velvet Underground one of its signature tones.)

“I see Along The Lethe as Jacob and I preserving an extraordinary moment of our lives,” explains Thomas. “It contains the most difficult and exalted experiences we’ve had creating music together. Writing it down makes it impossible to forget.”

Along the Lethe could have only been born out of these unique circumstances. Both Thomas and Jacob found themselves chasing anxiety with fits of inspiration as they wrote. And after parting ways with their longtime record label months into the pandemic, their artistic bond was strengthened more than either expected. “Creatively, it felt like a magical time,” producer Jacob Gossett shares. While up in the Poconos at the start of quarantine, with nothing but his laptop and Minilogue synth, he broke a months-long musical silence writing demos upon demos and sending them directly to Thomas. “In some ways this was another fortunate side effect of what was going on,” Jacob says of his process. “I wasn’t bogged down by finding the perfect synth patch or kick, just very much in the moment and inside the initial spirit of an idea.”

These spirits—of ingenuity, dynamism, communion, reflection— joined early demos like “I’m The Answer” and “Show Me How,” to be conjured, captured, then contorted into 10 songs that deftly usher in a new era of Beacon. Lead single “Until Next Time” is a soft-glowing piano piece bolstered by the hearty backbone of hip-hop. Its genre-blurring tracks touch on slinky UK garage, ecstatic synth-pop, and avant-garde electronica, even as they wrestle with heavy lyrical themes like seduction of forgetting (“Oranges”)  and the ecological intrusion of disease on civilization, sourced from Malaria research (“Harm”).

Album closer “Mile a Minute” somehow feels both unsettling and life-affirming with its sunny tones and skipping arpeggios at odds with a surreal vocal appearance from Matthew Dear and Automaton-delivered  declarations of love. “How could I try to leave this?” Mullarney sings, “It’s everything that I want.” It’s no stretch to say Along the Lethe is Beacon’s most eclectic, expansive album to date. As Jacob describes it, “It feels like a record without restraints.”

Along the Lethe arrives on September 30th, 2022 on the band’s imprint, Apparent Movement.