Our new series, Machine Life [programmed by Sound Room Manager + Club Programmer Steven Klavier], explores the relationship between human and machine in a club setting.  Each night an artist will perform a live set alongside a compatible selector for an exploratory journey into sound. The series kicked off with Gavilán Rayna Russom (Live) + quest?onmarq. Read the exclusive interview with Steven below. 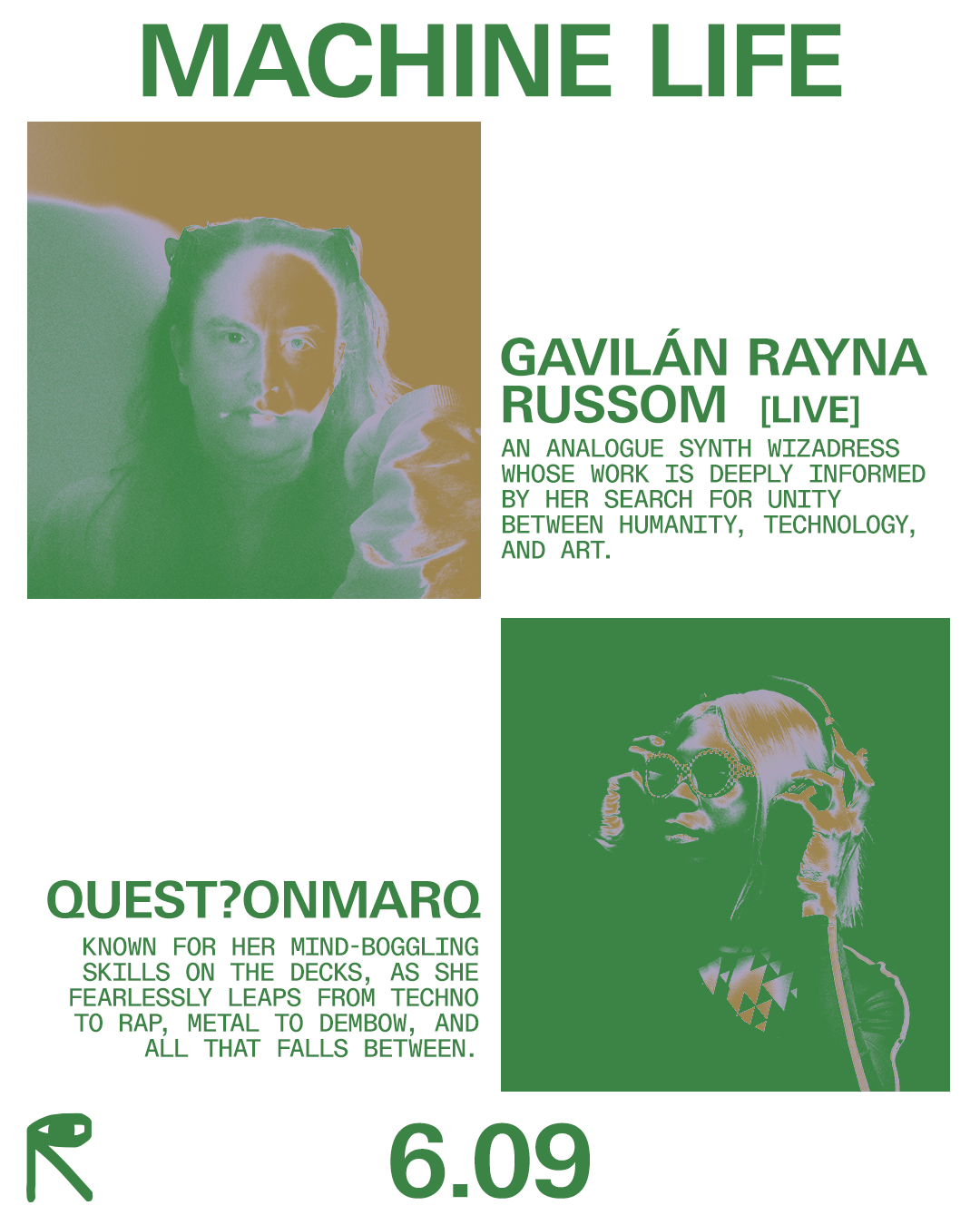 You make music under a variety of different aliases, can you tell us about some of the sonic differences between them?

Since I started on my creative path, which came into focus during the summer of 1992, I’ve been single minded in pursuing some specific relationships between drone, distortion, repetition and different tones. From 1992 – 1996 I was working to define sonically what those relationships were about. It was a stripping down process that mostly falls under the heading of the alias Child that I used back then. After all that stripping down I was left with something very minimal, very atmospheric that I consider the real essence of my sound. After that, starting with Paper Eyes in late 1996 I started to explore applying what I’d learned in that stripping away process to different styles of music that I liked. With Paper Eyes it was a blend of noise and dance music, when I was collaborating with Delia Gonzalez I applied my sound to the arpeggiated ambient synth music we were making, with Black Meteoric Star I applied it to underground rave and club sounds and working with Viva Ruiz in The Crystal Ark I applied it to a New York post disco no wave sound. When I worked with James in LCD my sound was applied to his writing along with all of the other different factors at work there. The sonic differences are created by what equipment I use and, in the case of collaborations, who I’m working with. The recording techniques are different for each project too. I use the recording studio, in whatever form, as an instrument. Since the release of The Envoy in 2019 I’ve been releasing music under my own name that continues the process of what I was doing with Child, but informed by everything I’ve learned from going through all the above projects. It’s genuinely experimental music in that I’m learning what it is by making it. But at the center of all of it are those key elements of drone, distortion, repetition and different tones.

What kind of sound can we expect from your upcoming set at Public Records?

I’m going to present live versions of some of the tracks I’ve released on Voluminous Arts over the past couple years as well as some extended improvisations with synths and samplers. This live performance will be beatless sound at the edge of drone driven by repeating patterns that are rhythmic but not drum oriented.

Tell us about Voluminous Arts. Why is it important to you and what were your goals in creating it?

By the time I started working with DFA in 2002 or 2003 I’d already been making experimental music for 10 years and most of it was never widely heard. Same with my DJing, which I started to do in 1990 but didn’t get many opportunities with until the connection with DFA happened. Working with DFA showed me that the experimental sounds I was interested in making and the tracks I loved to play when I DJ’ed could be popular, shared widely and they could be interesting and meaningful to many people. Yes, there was some pigeonholing that happened, and I struggled with that for some years, but mostly I learned that there were people in Europe, in Japan, in places all over the world that were into what I was doing. I wish I could have found that out earlier, so Voluminous Arts is most important to me because of the way it expands on that, not just for my own work, but for other artists who are younger than me, making great work and just don’t have the access points to be more widely heard. Voluminous Arts has a three fold approach; releasing works by artists I think are incredible and deserve to be widely heard, creating access to those older archival works of mine that I think also deserve to be heard and also being a place for me to release new music I’m making. It’s really about the places where dance music and experimental music meet each other, and exploring that in an expansive way. The biggest goal for me in creating Voluminous Arts was to bridge the gap between people who make radical exploratory and experimental music and people who can benefit from and enjoy those sounds because of the way they speak to neurodivergence, trans and queer experience, sexual non conformity and abolitionist politics.

What can we look forward to seeing/hearing from you in the upcoming year?

This event at Public Records is a big one for me. I was set to begin doing live shows of this kind right when the pandemic hit and cancellations began to roll out, so I haven’t had a lot of opportunities to share my new music in public space. The curatorial concept of live electronics and DJing is very up my alley for reasons that I think are obvious based on my answers to the previous questions. Plus I am super excited to play with quest?onmarq, I really respect and enjoy what they do. Starting in August Voluminous Arts is going to be in residence at Kaje Projects in Brooklyn and while the shape of that is still tbd it’s bound to be an exciting time with some great public facing events. After the Public Records show I’m taking the summer to do some work behind the scenes so I’ll leave it there for now but there will surely be some exciting stuff to come.

Can you speak on some of your biggest influences in dance music and how they shape your sound today ?

Nightlife itself probably serves as my strongest reference point. Before I allowed myself to become an artist, I was very much into following my favorite artists and discovering new venues and scenes along the way. I’m very passionate about venues and their sound systems. On my first visit to Public Records (also one of my first times out off-duty since the pandemic) I experienced DUMA in The Sound Room and fell in love with the space and system. I think spaces have the potential to be transformed with the artists, sounds and audience that occupy them and give them life. Supporting and collaborating with an artist like Rayna will certainly lend to some transformative experiences in The Sound Room. A distorted 909 kick also deserves a shout – preferably organized in a 4/4 pattern — both invigorates and rejuvenates my soul [see ‘Pitch-Hiker’ by Marc Acardipane]. My first night out in high school, this group of Italian-American kids took me to a club on Long Island. I heard ‘Blow the Speakers’ by The Moon and went wide eyed for the rest of the night. Subsequent invitations to renegade raves introduced me to gabber and other rave spectrum sounds. I was hooked from there.

What is your process on preparing for a set?

Before even getting to the music — I find the best pre-show prep to be properly minding myself for the night ahead. Getting good rest the night before [when possible 😅] or even a disco nap.. A good meal is also essential [not too heavy as to bring on the itis]. I used to be about raging and partying but as I’ve taken responsibility to guide the party I’ve adapted some healthier, more sober habits from folks I admire such as Honey Dijon and Rob GEE. My music preparation process as a digital DJ is quite long and mildly chaotic as I don’t feel there’s ever a way to prepare in advance for whoever will walk through the door of the show … no way to anticipate what the room will want. I ultimately rely on the room for guidance and inject a bit of what I want to share along the way. Being a digital format based DJ means I rely on the technology wholly to organize myself and my collection well in advance for when it comes time to take to the controls. The preparation needed to find precisely what I want in the moment to give life to the machines is very important and time consuming. Shoutout rekordbox and Pioneer dj! hmu, i have ideas for you 🙂

How do you feel about the current state of NY nightlife?

Ambivalent.. I haven’t been out much when I’m not working.. but I watch a lot of livestreams. I think at the moment there are a lot of folks that are playing music and not necessarily DJing… not looking up… agency DJs just checking off dates.. go off i guess? I’d personally rather stay in. Even after not being able to go out for two years. Recent events that have affected the people I care for a great deal at Bossa Nova and then similar tragedies that affected the team at Rash I’d just recently met have been very heavy to process. After we’ve all collectively been through such a stressful period — it has been great to see the ‘community’ rally to support and raise funds to help both teams.I’ve been going out in NY for almost 10 years. So much has changed.. to expect anything less in a city like NYC would be naïve. I remain optimistic and grateful for my role in NY nightlife and am excited to be playing locally more often than ever before, still making venue debuts here, connecting with new supporters and sharing myself in eclectic contexts! Super excited to inaugurate the Machine Life program and to have been invited by THE wizardress Rayna to support. See you soon!