Back to the Deep on Butler Street

Our very own Francis Harris chatted with Jenifa Mayanja ahead to get the scoop on being a resident for Back to the Deep, early influences, and favorite records. 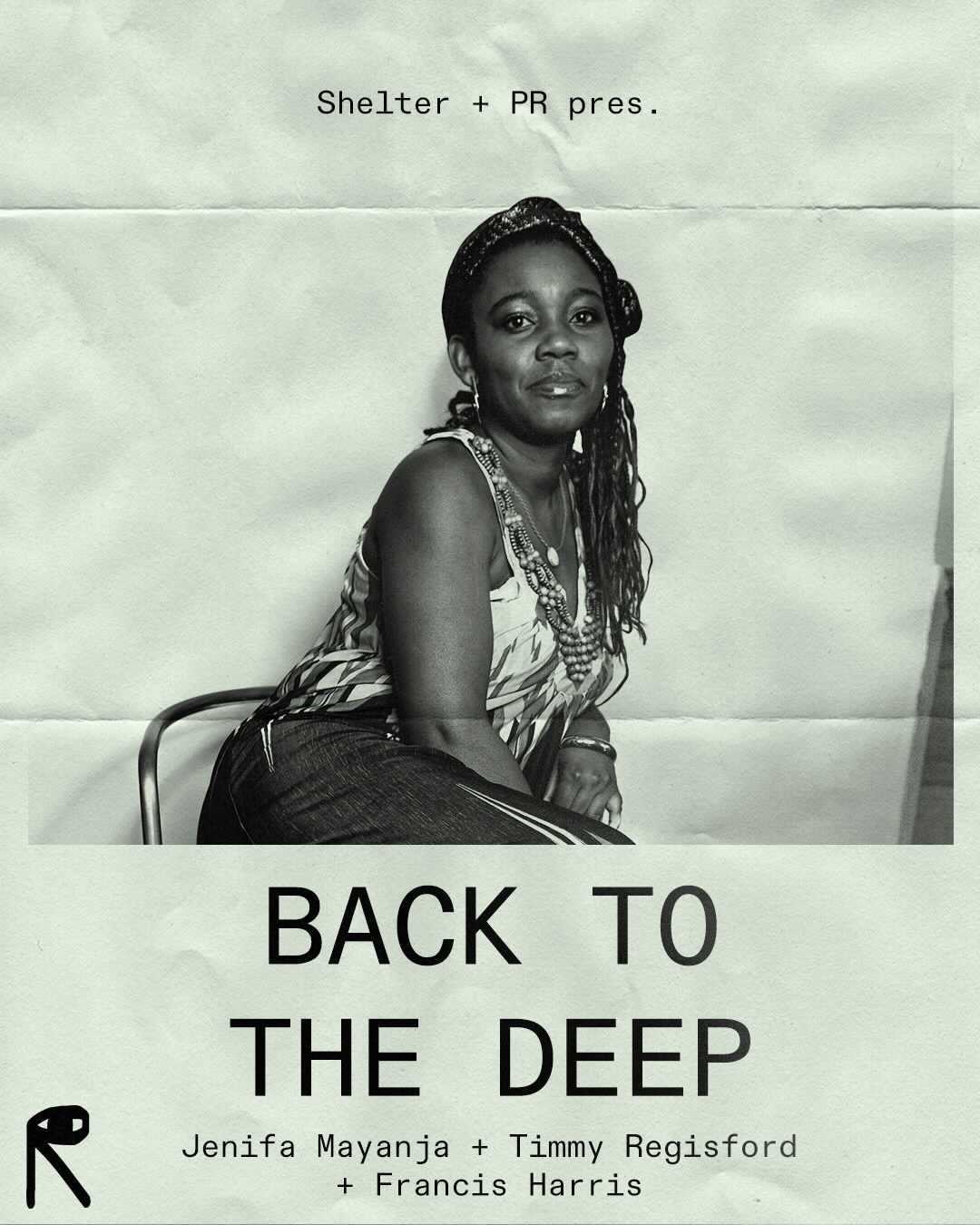 Hi Jenifa. Thanks for taking the time to chat with me today.

When we first spoke about having you as a resident here at Public Records you had mentioned that you had always wanted something like this in New York. Can you tell me a little bit about how you made your way to living here and what brought you to making and playing house music.

Hey, Francis, thanks so much, it’s great to have this chat today. It’s a great honor to have a residency at Public Records.

As we talked about in the past, I consider it a high point of my career as a DJ and certainly the culmination of decades of dedication I have put into this. I think for a lot of DJ’s from a certain time, having a residency means a lot. It means that you’re able to do certain things that you can’t really do going from club to club. But to answer your question directly about what brought me to New York: in the early 90s I had started to dabble into DJing. I was just completely seduced and had fallen in love with house music and deep house music to be particular. I just really loved everything about it. I wanted to come to New York because that’s where the music was, that’s where things were happening. And by chance a really good friend of mine had moved to New York and he really loved it. I went there to visit and heard deep house music coming out of almost every club and it just was an incredible experience for me and that realization that, you know, this was something that was bigger than me, something that also held importance to other people. Not just me in my little world in my little town. So that was very formative for me. And after coming to New York and visiting, I decided that I was going to take that leap and come to New York and like so many others that come to New York to, to fulfill a dream. I came as well. And here I am. So it’s been quite the journey, but I’m very grateful that I took that leap and I came to New York.

Were there any particular djs or parties from that era that were a big source of inspiration for you?

Yeah. Absolutely. I had a particular DJ that really had a huge influence on my style and how I wanted to develop it and that was Tony Humphries. Even before I had moved to New York I had started to follow Tony Humphries because there was just something that was so unique and magical about the way that he put two records together. It just became something else. Something otherworldly to me. When I moved to New York one of the best things was that I could actually hear him on the radio. So he had this radio show on Saturday nights on a major radio station – I think it was Kiss FM or something. It only came on once a week and you waited for it religiously because Tony would play, you know, dats of unreleased music that sometimes didn’t even come out for years!a dat was something you recorded music on like a tape…I started to study his mixes and that just took it to another level of fandom for me and like devotion to his skill. Over the years I’ve heard a lot of DJs and I haven’t heard anyone that does it the way that he does. For myself when I talk djing as a craft, That’s what I mean. When you’re able to do something with other people’s music and invoke these feelings, these emotions, this other state of mind and body and spirit you are expressing the craft of djing.

When I approached you for this particular residency, I felt you were one of the only djs around that still produces AND djs deep house. Back to the Deep is an attempt to come back to and maybe even reinvigorate the sound of 90s deep house both in America (at parties like Shelter) as well as in places like Italy. How would you describe your interpretation of house music? Do you feel it fits into this tradition?

Outside of the club, can you tell us a little about your education initiatives?  Now that you have been working with young artists, what’s your feelings about the next generation of producers, djs and artists? Do you feel there is a strong sense of understanding the history or do you feel there is a bit of irreverence that drives them?

Through my “the music life mentor” initiative, I’m working with a lot of different artists and music creatives at a lot of different levels. I’ve worked with artists that are just starting out and I have worked with artists that have been doing it for a while, but kind of lost their way. And what I do is not necessarily about giving you a set template of steps to take but rather about guiding you to intentionally design the career you want. Whether that’s building stability financially or sustainability creatively — whatever those dreams they have for themselves, helping them to reach them. In terms of understanding what is the driving force, I think it’s a very tricky question to answer. I am not always sure what is really informing the generation of now. I do see that it seems like there is a renewed interest in the past and young people wanting to know what came before, what was important. Why are things the way they are now? Like there must be a connection to the past. There must be some building blocks or might be something that has been going on for a while. So, I do see an interest and I do see a new enthusiasm that maybe was missing, I’d say maybe even five years ago, maybe even 10 years ago.

Now that we’ve played a few times together at Back to the Deep, are there any particular records that you felt really captured the essence of the party? If so, can you share a few with us?

Oh boy, you’re going to ask me about records. Of course. That’s what we’re here to do. There are maybe two or three jams that I can remember offhand that there was really those moments where I’m like really making that connection with those tenets of house music that I talked about and really captures that essence of Back to the Deep. And you know, what we’re trying to reinvigorate in the New York underground. I remember there was a K15 record that really permeated the floor and the spirits and the dancers and you could just really tell that connection was there and we were all just vibing on another level. I also remember, this TekniQ record that when the record came it was like you could just collectively see there’s an invisible energy that everyone is like actually feeling the track the same way. There was like some kind of electrical thing that happened and the music shut off, but everybody was so into the moment that they just kept vibing and, you know, creating their own music just to keep the feeling going. There’s also House of 909, that Deep Distraction EP. That’s something that you can put in the staple of the party. I would also add Playin’ 4 the City the shore I recently played that. That’s something that could be in rotation for a while because it just really captures that beautiful, reflective, atmospheric deep house that we’re so determined to put back at the forefront. I also remember, there’s a Fred P record that I played a couple of times that really brings those things back into the center again. We just try to make connections with the past and the now, and maybe even create music that will reverberate into the future. There’s a track by Marcellus Pittman called Pick Yourself Up. And there’s many more. But those are a few tracks that I can think of that I would say really capture the essence of Back to the Deep.