The three sat down to ask each other one burning question and share one track on heavy rotation.

CZ Wang and Will DiMaggio, following a transcendental set in the Garden, return to the dark of the Sound Room for another edition of their residency. They’ve invited Berlin-based C3D-E who runs the vinyl-only label Acting Press (alongside PLO Man) which has gained praise (and criticism) for its somewhat confounding nature, as it shape shifts and defies categorization. His latest release, Scattered Radiation, released on Acting Press, sees euphoric trance and 90’s break shatter through murkier club textures for a nostalgia-induced joy ride. Expect a night on subaquatic vibrations.

The three sat down to ask each other one burning question and share one track on heavy rotation. 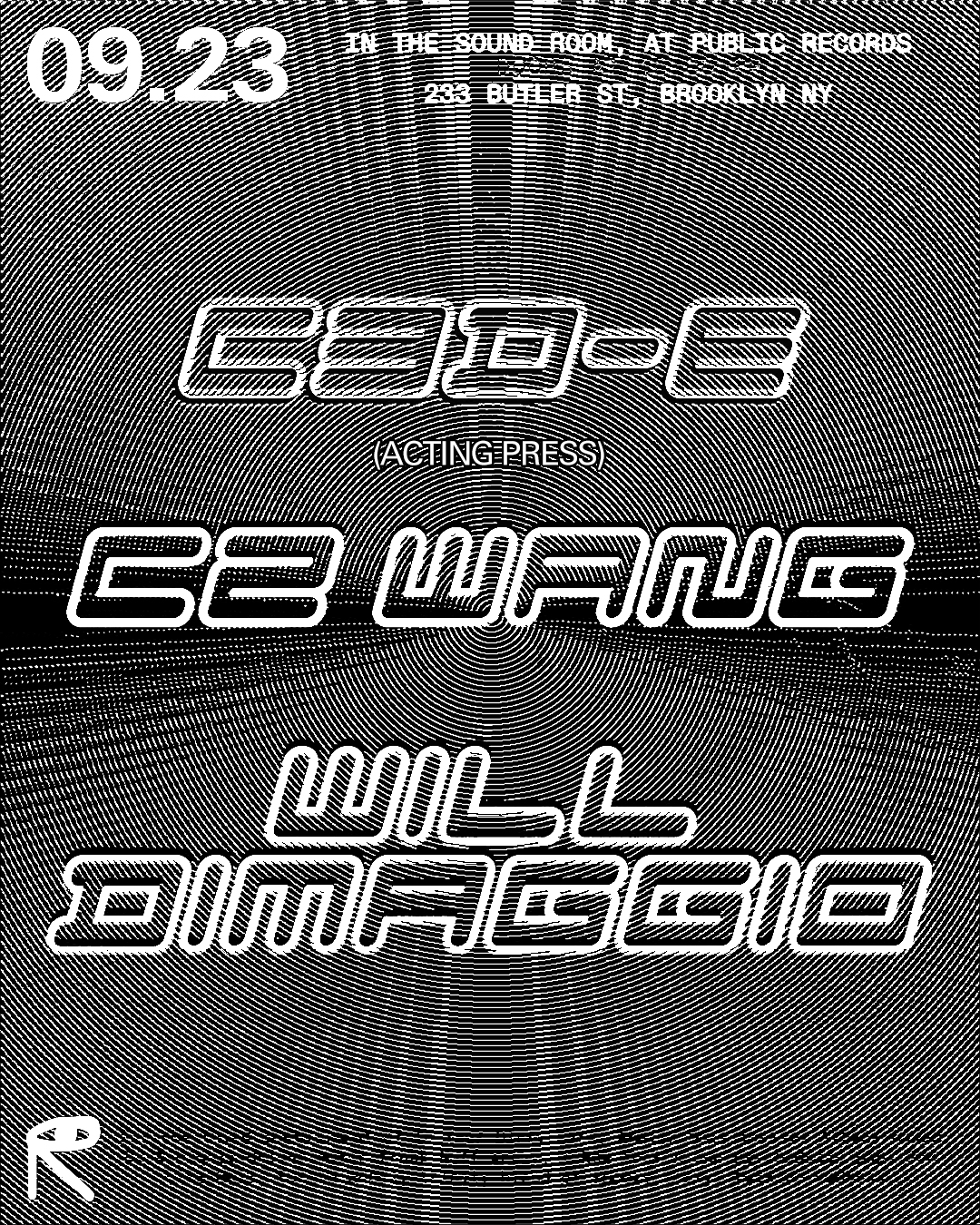 CZ asks C3D-E:  There is a song called Internal Content Generator off your new EP that just dropped. I’m obsessed with it, how did you make it?

The recording was made during the first lock down. I had taken a few pieces of gear home since I was not sure what was going to happen over the next while but felt it could be a good time to try to be really productive. I live in an old building where I can’t make much noise so I was actually getting pretty frustrated with the situation but the German government  decided to give all self employed people a relief fund which I immediately used to get myself a nice pair of headphones and that changed the whole situation. After that I basically just stayed home and made music. All the sounds you can hear come from a Roland MC-202, Alpha Juno and TR-808 and the rest is samples. I would usually start making stuff in the morning and then just let it run at low volume in the background while doing things around the house and kinda go back and forth between working on the music and doing other stuff. At night I would then try to record what ever I had at the time by doing as many takes I could until I felt happy or really frustrated. Everything was just recorded as a stereo file there was no editing or additional production done afterwards.

C3D-E asks Will: Something new you recently acquired for your studio that you wanted to share with us?

A friend recently loaned me an Alpha Recording System rotary mixer, which has been a sort of a revelatory experience in terms of mixing at home (I used to be totally rotary mixer-averse but am warming up to it now), but also cool for production. My process often starts with sampling, particularly for drums, auxiliary samples, scratches, etc., and it’s been cool to mess around with the isolators as I record.

Will asks CZ: One sound engineering tip that u feel isn’t considered enough?

Well I don’t know about what isn’t considered enough, probably a whole hell of a lot, but I was recently in the studio with Priori and Patrick Holland and they were hyped about this tip I showed them. If you find your drums needing to be beefed up or if you want them to sound more gritty and textural like an old breakbeat sample, try sending the drum group to an aux that has Soundtoys Devil-Loc on it with a Gate after. Often the compression in the Devil-Loc will flatten the signal to the point where it brings up the noise floor and other quiet parts in between the drumming, which can mess with the groove of the beat. The gate is there to cut those in between parts out and give you more control on how you introduce distortion to your drums. Dial in to taste with the send volume. It works wonders on live drums or loops but also good on electronic drums. Add a plate before devil lock and you have a really unique gated reverb that has cool textures from the saturation.

Heavy Rotation: U Mind by Fashion